Hello all, my name is Jamy Randol, and I am a freshman at Panorama. 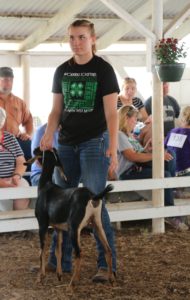 I’ve been raising Nubian goats for about 5 years now. My love affair with goats started when my older brother got two boer does as a 4H project. During that first year my brother got busy, so I took over raising his does for him. At the first goat show I went to I was going through all the pens, checking out the competition, when all of a sudden I see these three does with huge ears, and I was hooked. I wanted my own goats like that. I later learned those does with huge ears are called Nubians. My parents are a huge support system for me, but I had to work hard to prove to them that I was capable of taking care of my brother’s goats before I could get my own. After the show I worked harder, and that next year I had two little Nubian does I call my own.

With those two Nubians I got an entire new support system. I purchased them from Goat Hollow, and the breeders Lori and Jeff took over mentoring me. At the time I thought I knew everything there was about goats, but boy was I wrong. I hadn’t even scratched the surface. I have learned so much from Jeff and Lori, and I’d be lost those first few years without them. For example my very first year of kidding, the very first doe had two very big heads trying to come out at once. Unfortunately I lost the one of the kids, but I managed to get the other two out. Both of the kids were weak and I immediately called Lori and Jeff up and they patiently guided me through what I should do to help the kids. Both of the kids pulled through, and are big happy herdsires. Not only do I have Lori and Jeff as mentors, over the past year I have also gained Jamie and James McDaniel. I truly don’t know what I’d do without them.

I used to be big into sports. I played soccer, basketball, and volleyball. During the summer I sustained my third serious concussion, and I will not be 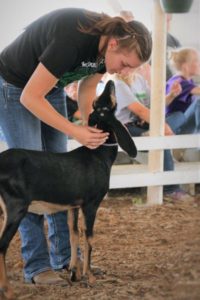 able to return to sports for a good long while. Sports were a big part of my life, and to have that ripped out of my life at first crushed me. I then realized that sports don’t define who I am. Because of that last concussion I’m able to spend even more time working with my goats, and doing other activities that I was missing out on because of my sports. Although I am not able to play sports, I’ve found something just as good as playing, coaching. I currently coach a U9 soccer team, and trust me I’ve learned so many lessons from coaching them. I am an active member in 4H, and FFA. I also play saxophone in my school’s band, along with piano for fun. Whenever I need to clear my head, whether it be a migraine or just too many thoughts, I like to pick up my colored pencils and draw.

I can not wait to be the youth ambassador this year! Thank you!